You’re offline. This is a read only version of the page.
Secret Believers Advocacy | 02 June 2022
Secret Believer Serves the Country That Rejected and Imprisoned Her
Show: false / Country: Advocacy /

Dhea is a Christian from a Muslim background living in South East Asia. She grew up in a strongly Islamic country, which we cannot specifically identify for security reasons.

“From a very young age, I had the desire to please God,” she says. “I thought the best way to please Allah would be to follow Islam as best as I could. So, I learned the prayers; as a small child I would walk to the mosque at 4 am for morning prayer; at six years old I started keeping the 30-day fast for Ramadan, and I asked my parents to send me to a religious school to learn more. By the time I was 12 years old, I knew the whole Quran by heart. I was doing all this because I truly wanted Allah to be happy with me,” she said.

When she was just 15, Dhea was raped by a very well-respected man. She did not tell anyone what happened, but after three months it was clear that the rape had led to pregnancy.

She thought she was a sinner ‘going to hell’ because she had been raped and became pregnant when she was not married – a ‘crime’ for which she was sentenced to lashes and imprisonment.

“They took me to the Islamic court, where I was tried. The judgement was a hundred lashes and two years of prison. First, a guard beat me with leather and iron as people stood by watching. They broke my legs so I could not stand but they dragged me to my feet anyway and gave me 100 lashes. After that they put me in prison,” she said.

Dhea’s crime was considered one of shame. Her time in prison was more like an exile in a remote part of the country, and although she was not allowed to leave that area she did have a small degree of freedom.

During her imprisonment, Dhea developed malaria and was taken to hospital. Her situation just seemed to be getting worse. However, it was while she was in the hospital that she had an encounter with a Christian which would change her life forever.

“I was taken outside the ward for an injection when a foreign man asked me why I was a prisoner. He seemed very curious about my presence there. We had a conversation of only five to seven minutes, no more than that, then I was back inside the ward”, she said.

This man was a Christian from another country. God had called him to go to Dhea’s country and share the gospel even though such a ministry is completely illegal there. He had only been allowed to stay in the country for two weeks, but during that short time, he was able to meet Dhea. Later when she was out of hospital and back in prison he managed to send her a Bible.

“I was so angry with this man. How could he send this to prison? If somebody had seen me with this book I would have received even more punishment, and I was so worried,” Dhea remembers. “So, I thought, ‘The best thing will be to burn it.'”

Dhea intended to burn the Bible when no one was watching her.

“I was going to burn the book so that no one would ever know I had had it. But as I lit the match I realized this book is forbidden in my country, I don’t think anybody in my country had ever really seen this book. I believed I was already a sinner going to hell, so I thought one more sin wouldn’t make any difference, and I decided to read it before I burnt it,” she said.

When she opened it the first words she read were the words of Psalm 139:16 – ‘Your eyes saw my unformed body; all the days ordained for me were written in your book before one of them came to be.’

After that, she could not burn the Bible.

“For the next nine months, I read the book every day. I read things I had never heard before – about a God who was loving and forgiving. I read about the life of the Lord Jesus. All the things I read were new and although there was nobody to explain anything to me the Spirit was there and I understood that the Lord Jesus is my Saviour, my God,” she said.

A Voice In A Dream

One night shortly after, Dhea had a dream. “I was in a very dark place, and then there was a light coming from far away. So I started walking towards that light, and the light started spreading around me. Then I looked back and saw the darkness – a dark hole far away, and I realized I was standing in front of a door where the light was coming in. At that point, I could choose to either enter the door or go back to the darkness. I decided to walk through the door and, as I entered, the place was full of light. Brightness, like no light on this earth. It was so comforting. 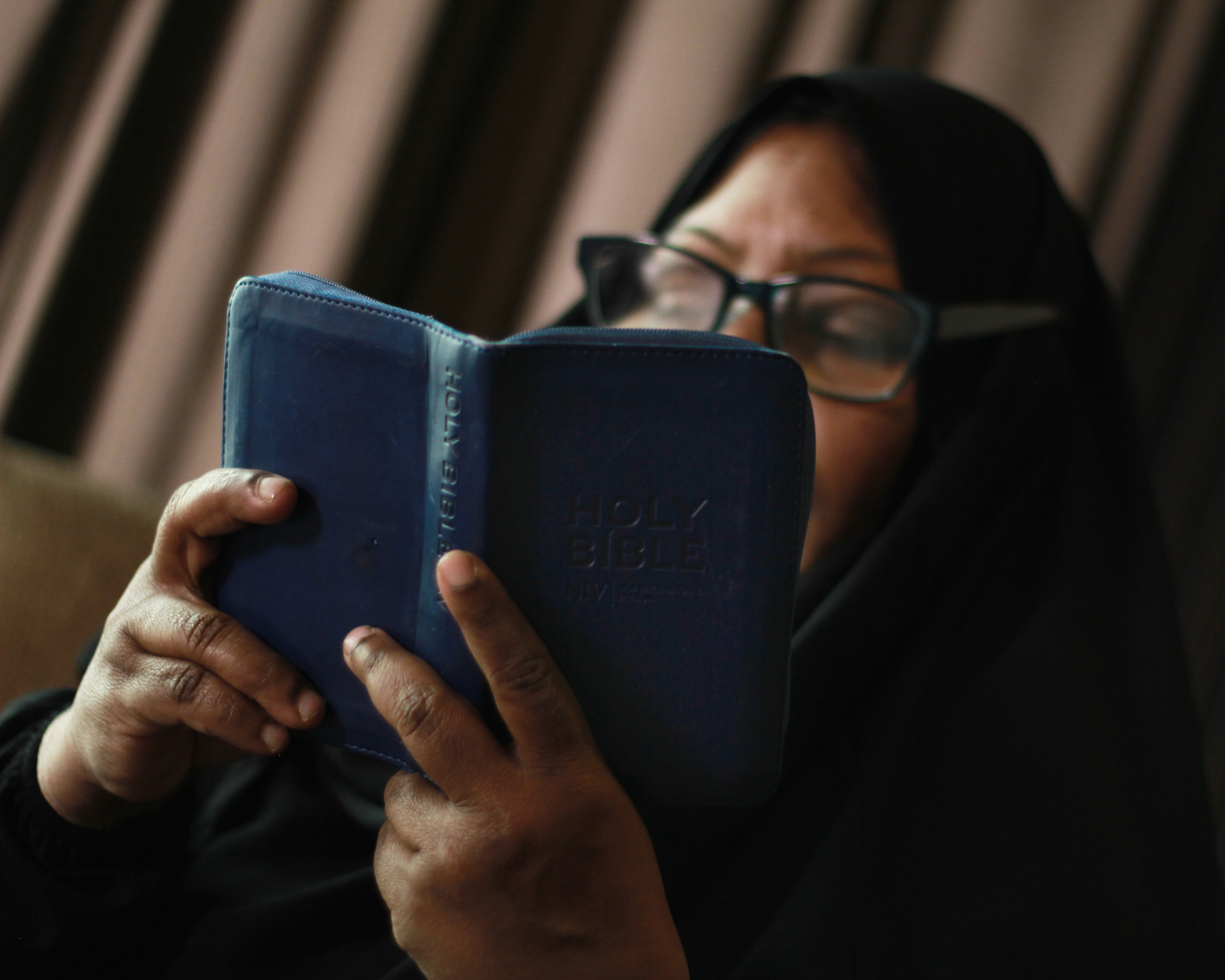 In photo: Dhea reading the Bible

Nine months after finding the Bible, Dhea’s time in prison ended, and she returned to her family. However, she could not keep her new faith a secret for long.

“After I came back, I knew I should not be speaking about what was happening in my heart and my life, but it was coming out in diverse ways,” she remembers. She soon told her parents about what she had discovered while in prison. “I told them about the dream, about what was written in the book, about God, about this life, about the afterlife, about forgiveness, but they were outraged. Half the time they were shouting at me, I don’t think they even heard,” she said.

Leaving Islam is a grave betrayal in Dhea’s country.

“It’s more than being a traitor. A murderer is better than that. It is the worst thing that a person can do. The person does not deserve to live,” she explains.

Dhea’s family disowned her, and soon everyone in her community had heard that she was a follower of Jesus. They thought she had lost her mind. Religious leaders questioned her. Dhea said, “I knew I must not say what I was saying; I knew the consequences. But, despite myself, I still spoke of what the Lord had done for me. This resulted in me going to prison for a second time, and this time it was far worse. They would mock and say, ‘Jesus will come and save you.'”

Eventually, Dhea was released from prison and, with help, moved to another country. She said, “If I had stayed, I don’t think I would still be alive.”

‘I Am A Follower Of Jesus’

After leaving her home country, Dhea went to church, studied, worked, and started a whole new life in another place. She missed her home and family terribly even though they still would not answer her calls. However, as time went by, they eventually started to communicate and she was even able to share her faith with them.

Today, Dhea lives in a country near to her home country, serving others through hospitality. “People from my country come to me for medical treatment because there are no specialist hospitals at all in my country,” she explains.

“People might come here for help with anything from a sinus infection to cancer treatments. Most of the visitors are strangers. I open my house for them and provide free food. They all know that I am a follower of Jesus. I cook and clean and bandage their wounds and take care of them. I treat them as my own family. At times it can be challenging because even though they eat my food, they will not want to eat with me because I am a follower of Jesus. In those moments, my love dries up. I do not have any love. But my love is not good enough anyway – it is God’s love,” she said. He shows His mercy and love to them.

Because Of Your Support

In this way, Dhea can share the good news of the love of Jesus with people from her own country, despite her country being completely closed to the gospel. Your prayers and support help to make this work possible. Open Doors local partners support Dhea’s ministry financially to provide her with spiritual support and encouragement as she continues her valuable work. She says, “I have been so encouraged by their love and their heart for my people”

There are few believers in Dhea’s country – too few for effective ministry. Therefore please pray for more people there to come to faith in Christ just like Dhea. May He reveal Himself to them through dreams and visions, through his Word, by whatever means. And that they will be courageous witnesses and testimonies to God's love.

Will you be a family to isolated Christians– and keep the door open to the Gospel in Central Asia?

Every PHP 5,000 provides vital aid for an isolated Christian family struggling financially because of persecution.
Every PHP 7,500 runs a training seminar for brave leaders like Ruslan, so they keep serving others.
Every PHP 10,000 trains an isolated believer in a new trade, so they can provide for their family. 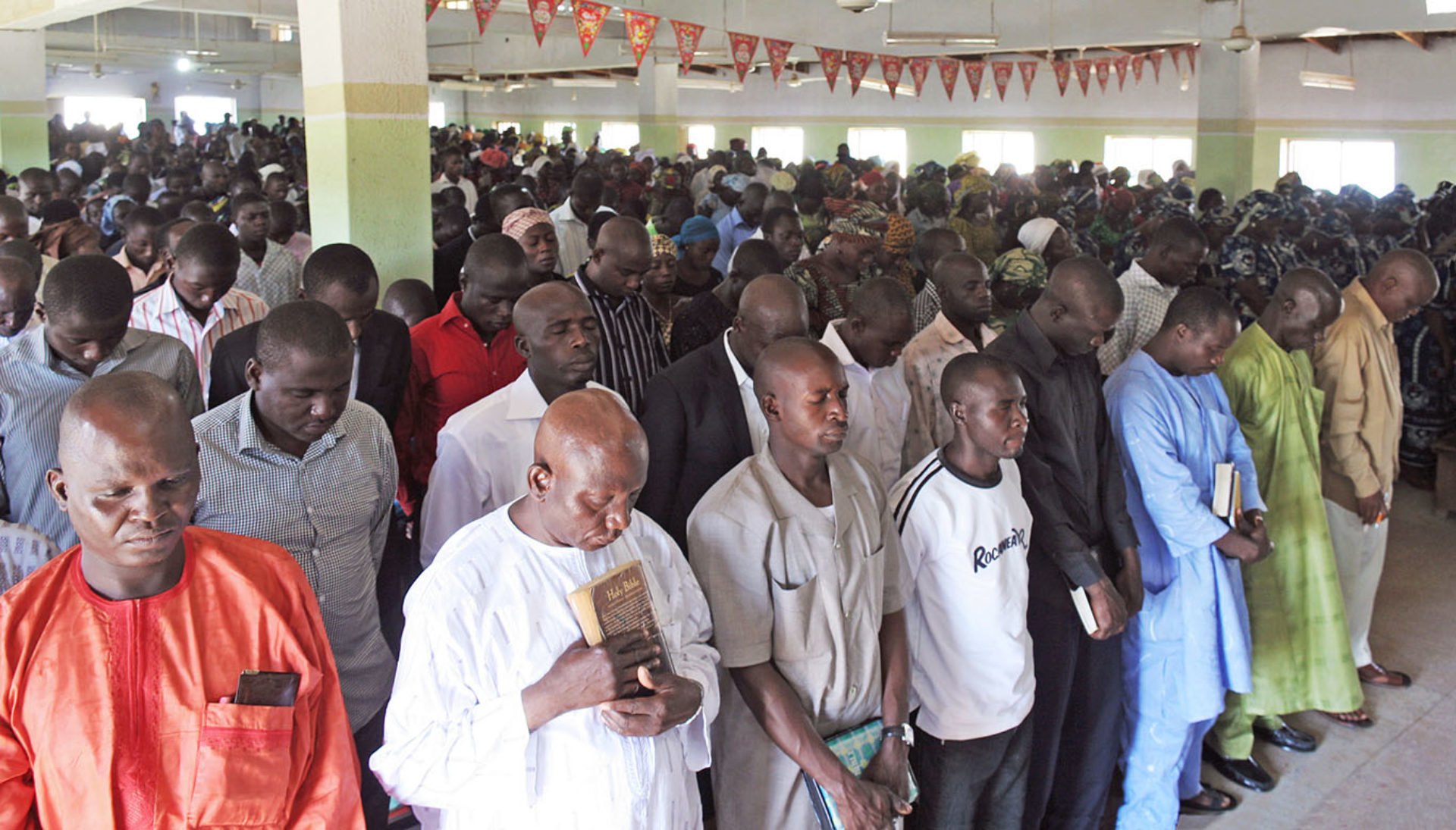 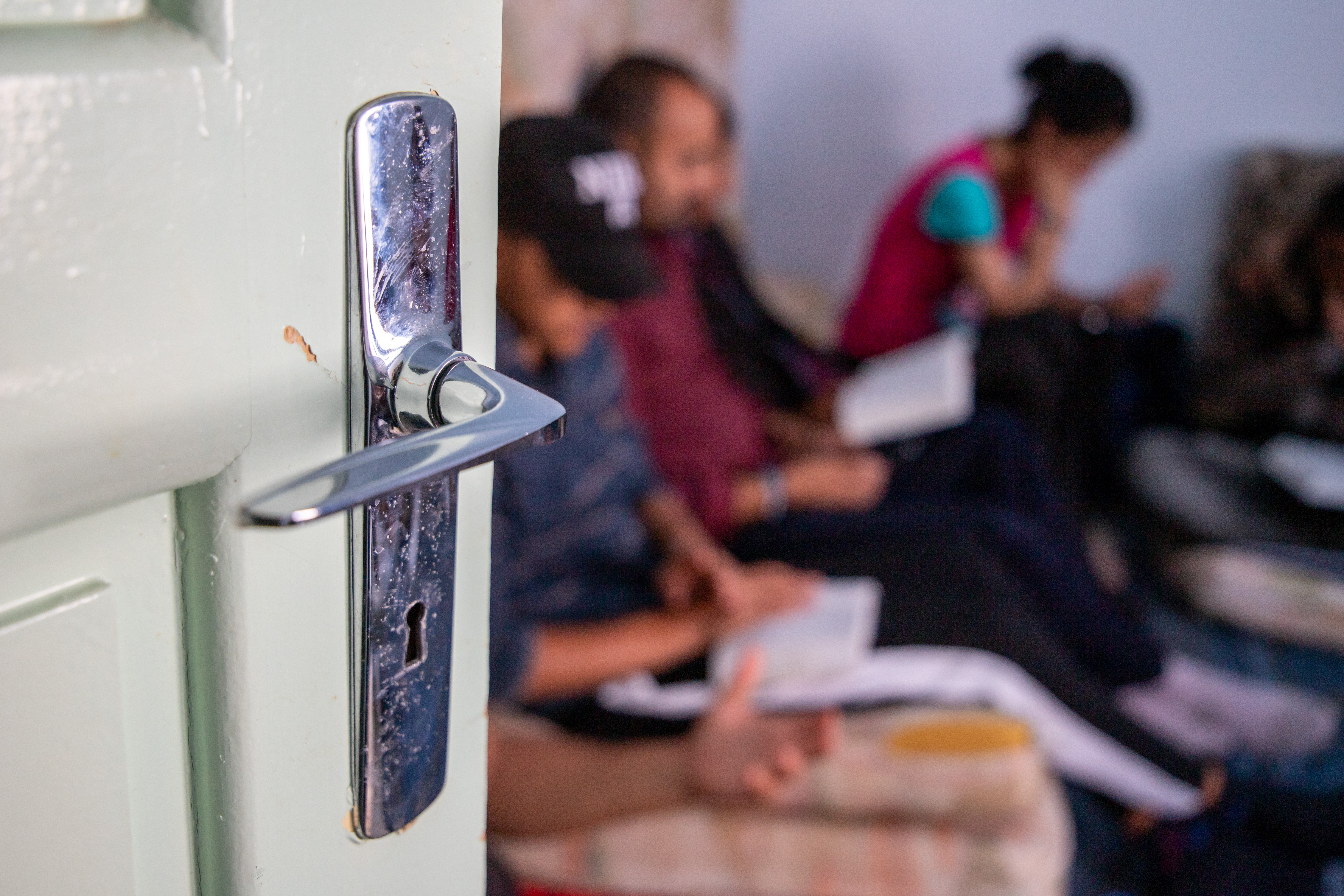 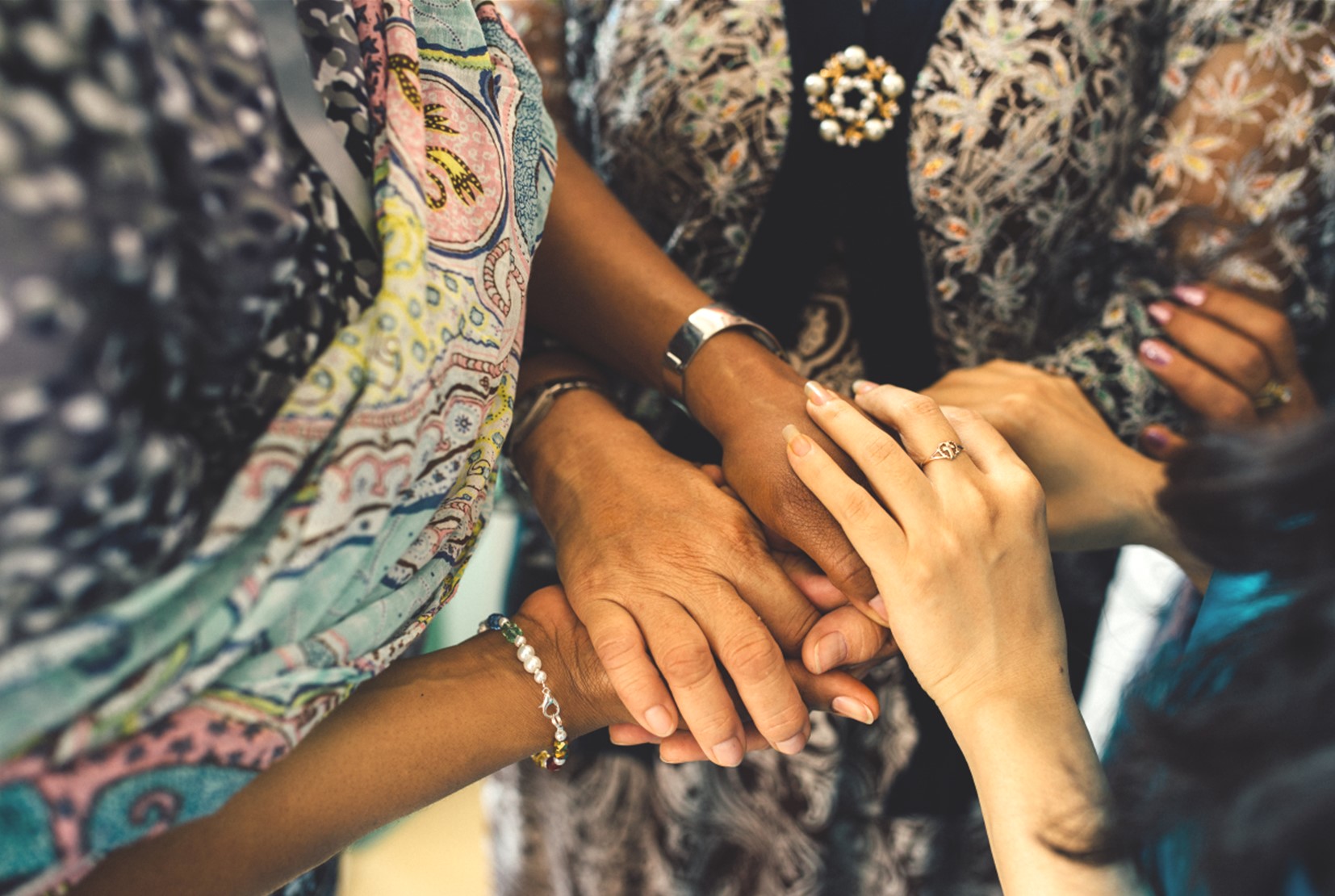